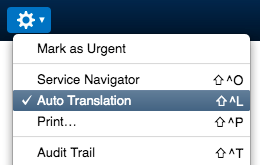 People can switch the ‘Auto Translation’ option on or off in their personal preferences when they go to ‘My Profile’.  Specialist can also activate or deactivate this new feature by pressing the Actions button in the toolbar and selecting the ‘Auto Translation’ menu option. By default this option is switched on for everyone.

People who are multilingual can select additional languages in the Do not translate field to prevent notes written in those languages from getting translated by 4me.

The Auto Translation feature works for all notes that have been added to requests, problems, releases, changes, change tasks, projects and project tasks.  When someone opens one of these record types, the Auto Translation feature starts by detecting the language in which each note is written.  Any notes that are written in a language other than the user’s language, or any of the languages that the user does not want to have translated, are then translated into the user’s language.

Pressing the yellow button causes the original text to be presented.

4me will not translate a note, regardless of the language, if the person who is looking at it wrote the note.  Also, monospace texts and code blocks never get translated.

Auto Translation also works in the 4me App and 4me Self Service so that end users and support specialists can all work in their preferred language. 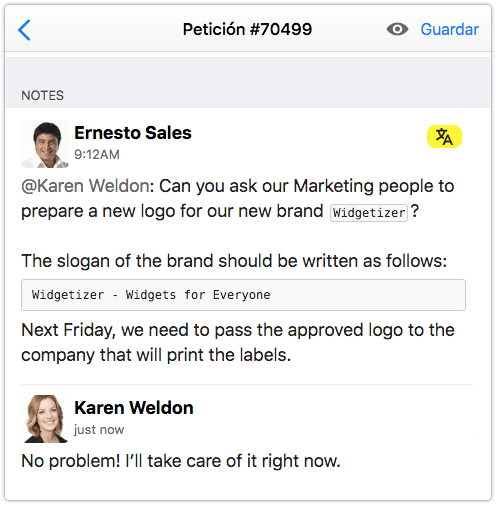 The languages that are supported by 4me’s Auto Translation feature are:

Note that support for some of these languages was added after the initial publication of this post.  More languages will continue to be added over time based on customer needs.

The Auto Translation feature is free of charge, so there is really no reason not to use it.