The new Baseline functionality for projects makes it possible for project managers to identify deviations from the plan as soon as they occur. As project members work on their tasks and enter the time they spent on them, as well as the remaining effort, 4me shows project managers whether their projects are on track. Specifically, 4me now indicates:

This new functionality in 4me supports the Earned Value Management (EVM) methodology. EVM is extremely powerful, mainly because it exposes issues with projects at an early stage.

To make this work, 4me now generates a baseline each time a new project phase starts. For this to work, though, the project manager needs to belong to an organization that has ‘Assignment task tracking‘ switched on in its timesheet settings.

A baseline is essentially a snapshot of a project plan, but each baseline provides a lot of information for project managers. To explain the meaning of all this additional information, it is best to use a simple example. So let’s assume that a new project has started, that the first task was completed 4 days ahead of schedule, and that it only took 2 hours to complete this task instead of the budgeted 4 hours.

When the project manager opens this task and expands the Baseline section, the following information becomes visible: 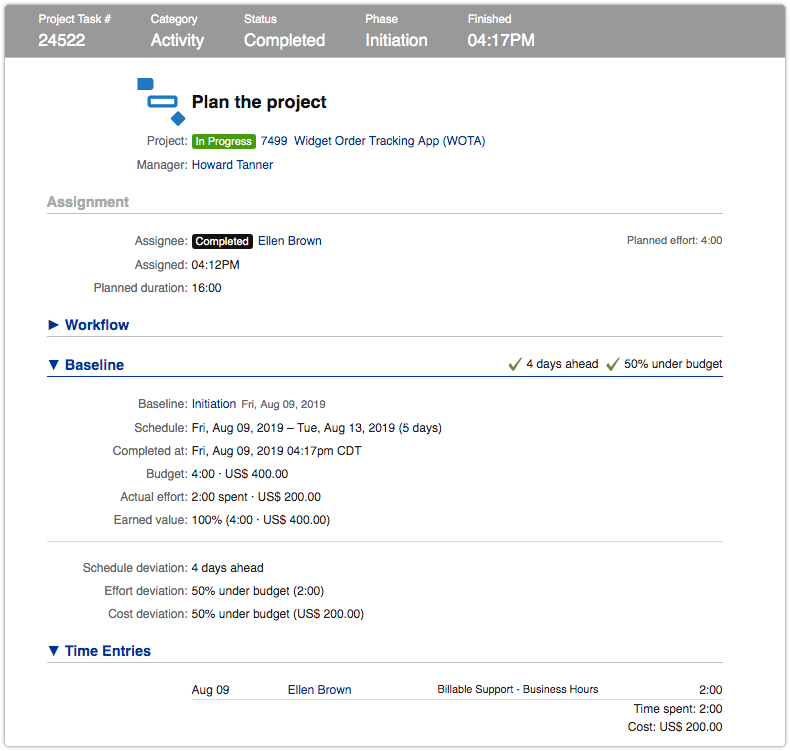 The Baseline section shows that the snapshot was taken on August 09 when the ‘Initiation’ phase started. The task was scheduled to be completed in 5 calendar days, but it was actually already completed on the day that it was assigned. That is why the task has a schedule deviation that is 4 days ahead of schedule.

The planned effort for this task was budgeted at 4 hours, but only 2 hours were needed to complete it. As the task was successfully completed, all the value that the organization stood to derive from it has already been earned. That is why the earned value is set to 100%. 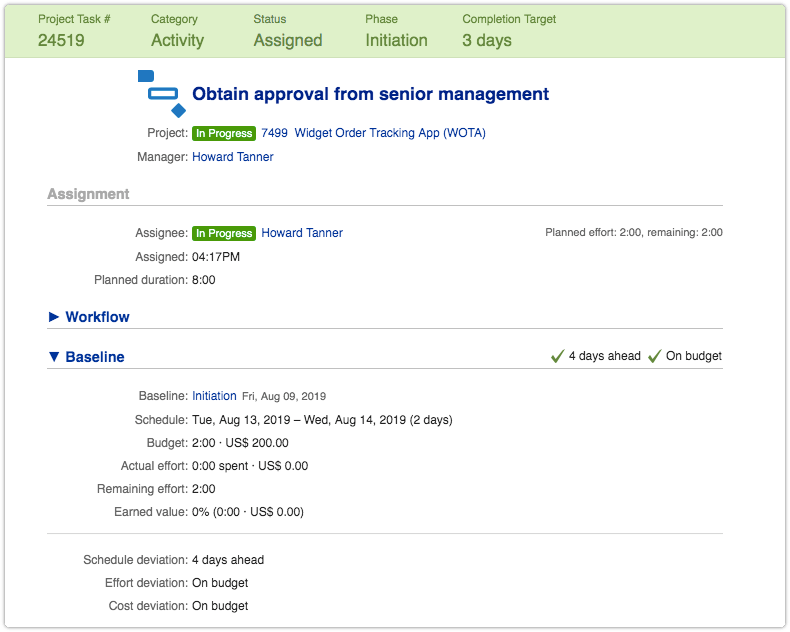 Because this task was assigned 4 days earlier than planned when the baseline was generated, the schedule deviation is 4 days ahead of schedule. This is also reflected in the Baseline section header so that it is visible even when this section is collapsed.

Because no time has been spent on this task yet, the effort deviation and the cost deviation are both presented as ‘On budget’.

Now let’s assume that the assignee starts to work on this task. After spending 1 hour on it, the assignee updates the task. He enters 1:00 in the Time spent field and indicates that he still expects to need 3 more hours to complete it.

When the project manager opens the task, the baseline information is a lot more interesting: 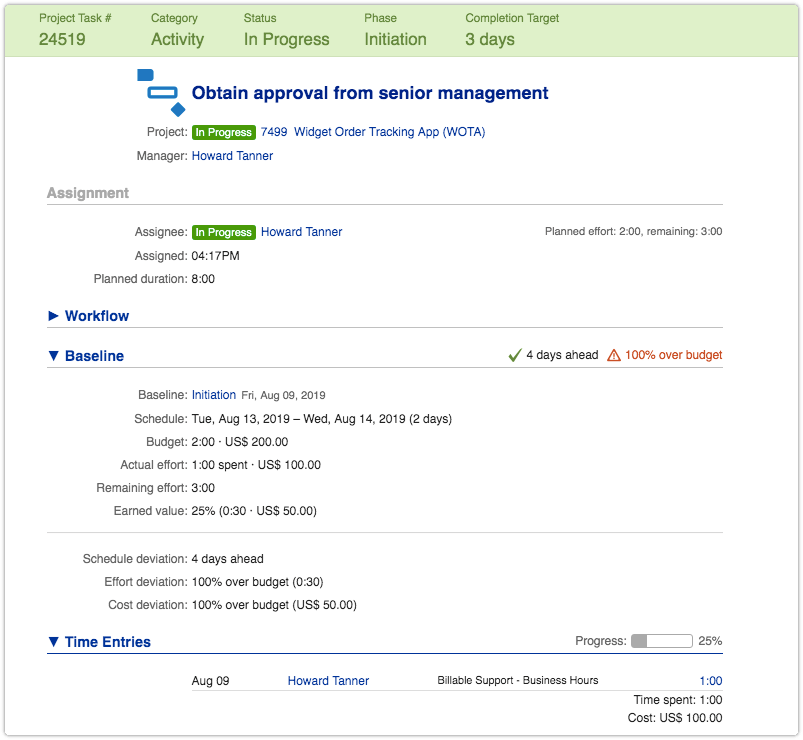 Originally, this task was expected to take 2 hours to complete, but because 1 hour has already been spent and 3 more hours are expected to be needed to complete it, only 25% of the work appears to have been done. So the earned value is 25% (or only 30 minutes instead of 1 hour of the budgeted 2 hours).

It should have only taken 30 minutes to complete 25% of the task, but it took 1 hour. So the task is now 30 minutes over budget at this stage, which is an effort deviation of 100%.

When the project manager looks at the project itself (rather than an individual task), the baseline looks as follows: 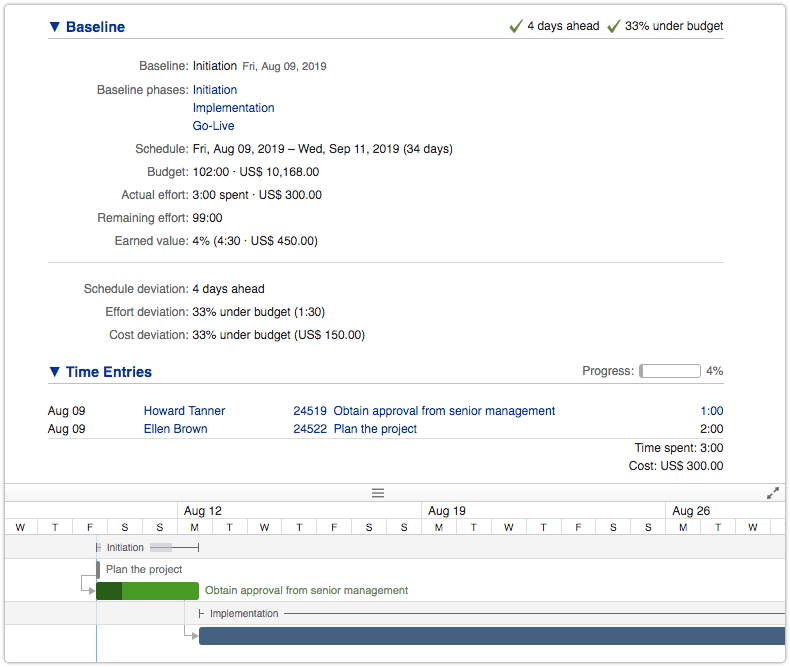 Because it took 2 hours to complete the first task and 1 hour was spent on the second, the actual effort to date totals 3 hours. This can also be seen in the project’s ‘Time Entries’ section.

The remaining effort is 99 hours, even though the second task is expected to take 2 extra hours. That is because the first task took 2 fewer hours to complete.

So far, the scope of the project did not change, but 4me will warn a project manager when it detects scope creep or a reduction in scope. This happens when: 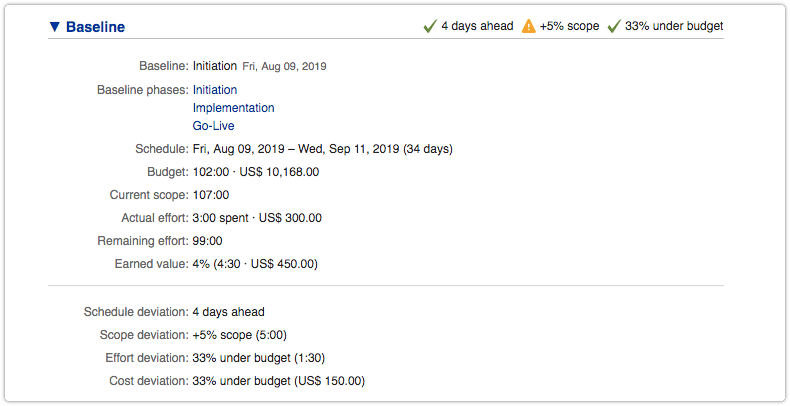 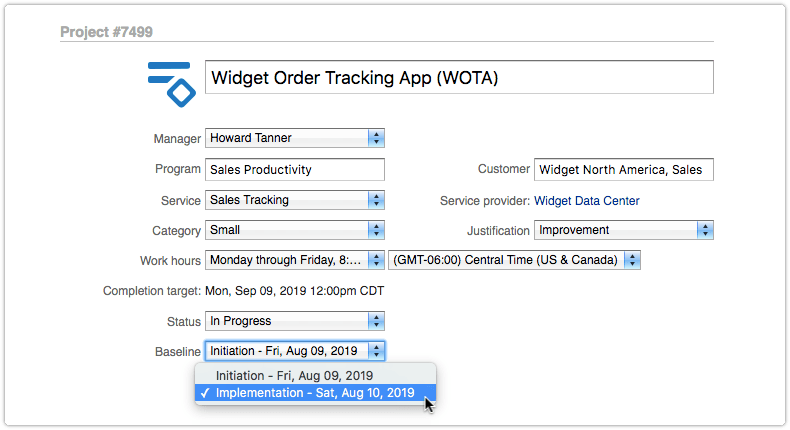 After selecting a different baseline for a project, this baseline is used in the Baseline section of the project and all its tasks.

Obviously, things get more complicated as different individuals work on a project task, but project managers do not need to concern themselves with this. 4me automatically generates the baselines at the appropriate moments, takes care of the calculations so that project managers, program managers and portfolio managers can simply focus on the schedule, scope, effort and cost deviations of the projects.