A new feature has been added to make it easy for problem managers to keep people, who were affected by a problem, up to date.

Now, when a problem is placed in Edit mode, the checkbox ‘Copy note to requests’ is available below the Note field. When this box is checked and the problem is saved, the new note gets added, not just to the problem, but also to all requests that are linked to the problem. 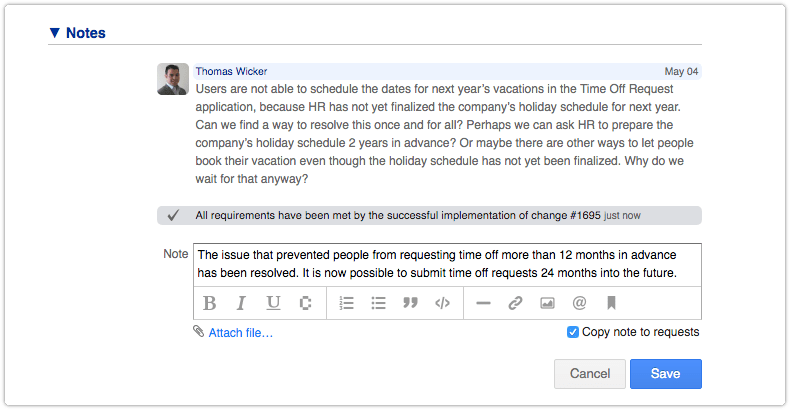 This feature has been added primarily to assist problem managers. They can use it to inform the requesters, who previously received a workaround for their incidents, that a permanent solution has been implemented. But this feature is also available to specialists so that they can use it when they have information to share with the people who were affected by a problem.

Because it can take quite a while for a permanent solution to get implemented for a problem, it is likely that the requesters receive such a note from a problem a long time after their requests were completed with a workaround solution. Yet end users were only allowed to add notes up to 28 days following the completion of their requests. To allow end users to respond to a note that was added much later, they are now allowed to add notes to their completed requests up to 28 days after the request was last updated.