Automation rules are now able to call webhooks, enabling these webhooks to deliver a custom payload to a target server.  Why this is such a powerful new feature is best explained with an example.

Let us assume an enterprise organization has a service that its employees use to submit their expense reports.  Requests to gain access to the Expense Reporting service can be submitted by any employee using 4me Self Service.  The request template the enterprise has made available for this is linked to a change template with two task templates, which together define a 2-step workflow.  The first step is an approval task for the manager of the person for whom the request was submitted.  The second step is an implementation task, which will automatically be set to the status ‘Assigned’ as soon as the first task has reached the status ‘Approved’.

The second task could, for example, be assigned to the security team, where a specialist would manually provide the requested access.  4me’s automation rules now make it much easier to automate this step, thanks to the new capability of defining a customized payload which an automation rule can ask a webhook to deliver to its target server. 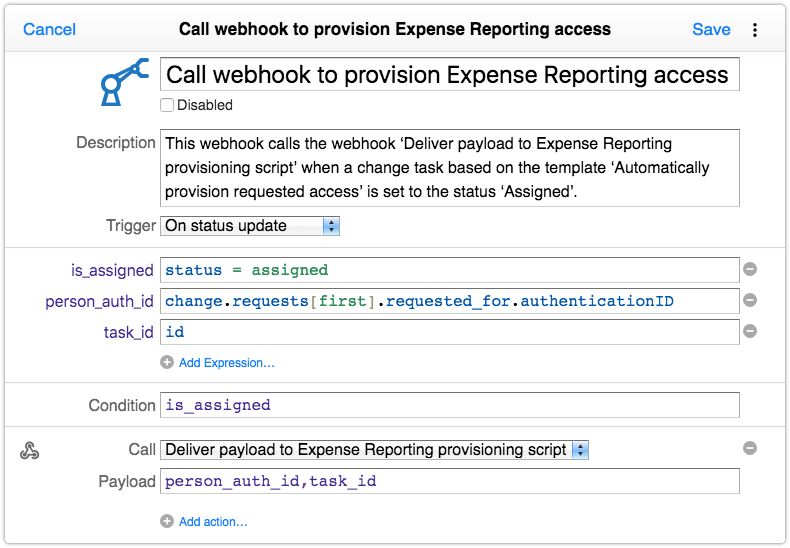 The green task icon in the automation trace indicates that the condition of the automation rule was met.  Clicking on the webhook icon on the right opens a preview of the webhook.  From this preview, it is possible to open the last webhook delivery in a separate browser tab with a Ctrl+click on its ID.

The webhook delivery contains all the details of the webhook request, including its payload.

Both the person_auth_id and the task_id expressions are included in the payload.  The person_auth_id can be used by the script on the target server to give the right person access to the Expense Reporting service.  After the script has provided this person the requested access, it can use the task_id to tell 4me’s Task API to set the status of the task to ‘Completed’.  That will automatically cause the change and the request to be completed.  And when the request is completed, 4me generates a notification to let the requester know that (s)he is now able to submit expense reports.