Hasselt University Switched to 4me to Professionalize Its Service Management Organization

Hasselt University is an innovative university with a strong international orientation. Founded in 1971, it is the youngest university in Belgium. It consists of seven faculties, two schools, and six research institutes on two campuses. More than 7,000 students and close to 1,600 researchers and staff members are connected to the university.
Hasselt University is ranked among the best institutions worldwide and stands for excellence in education, top research in leading fields, and active commitment to innovation and entrepreneurship. It offers attractive undergraduate, graduate and PhD programs in its seven faculties (Business Economics, Sciences, Medicine and Life Sciences, Law, Architecture and Arts, Engineering Technology, Rehabilitation Sciences), School of Transportation Sciences, and School for Educational Studies.

The university previously worked with an open-source software solution (GLPI) to manage its IT services, but this no longer met the requirements for the higher level of service delivery it was aiming for.
The university keeps growing and needed a more professional and future-proof service management solution with a user-friendly and state-of-the-art self-service portal that would help it reach a higher service maturity level and improve efficiency.
An audit conducted by PwC and Deloitte a couple of years ago triggered this need for IT to professionalize its services and create more positive awareness of IT among its end users through positive service experiences.
Hasselt University started an RFP, and from the longlist, 4me, Ivanti, and Ultimo (used by the university for facility management) made it to the shortlist. ServiceNow and TOPdesk were on the longlist but didn’t make it to the shortlist as they didn’t meet all the set criteria.
Filip Reyns, ICT Manager at Hasselt University, is responsible for the IT infrastructure of the university, the network, service suppliers, and the ITSM service desk. He explains: “We were looking for a complete solution that would enable us to cater to all the IT needs and tickets of our customers in a more professional and efficient manner, now and in the future. The desire was to become a more mature service organization by redesigning our service management processes in a modern and complete ESM solution.”
The team developed six scenarios for the future way of working within Hasselt University.
Based on these scenarios, the three remaining service management solutions were tested. In addition, they looked at the overall ITSM functionalities, the integration possibilities, reporting/dashboard possibilities, options for different approval processes, the use of project management, the ease of use and ease of administration, the TCO of the solution, the out-of-the-box possibilities, SaaS environment, implementation time and the pricing plan.
A group of eight team members looked at the demo presentations of all three solutions. They all gave each of the solutions a score on the different criteria. 4me was selected because it ticked all the boxes and came out on top.

“After more than a year, we see very good results; it is all very positive. The research shows that over 80 per cent of all IT service users are satisfied or more than satisfied with the quality, speed, knowledge, user-friendliness, and overall experience of the 4me solution. This was certainly not the case before.”

The implementation of 4me was done in collaboration with 4me partner 2Grips.

Filip says: “The collaboration with 2Grips is excellent. They have a no-nonsense, practical hands-on approach, and there are no superfluous theoretical sessions. They are well informed about what is going on in the workplace, they have that huge practical experience and as a result, they have been of great value because we don’t always have all the necessary knowledge in-house.”

It only took 24 days to set up the whole 4me environment, but that time was spread across two phases. The reason for that was to take some time to get people on board the new way of working and request processing.

During phase 1, the 4me solution was implemented, including the 4me Self Service portal, support processes, and Knowledge Management. This phase included incidents and requests and the service catalog, and also various workshops and training.

In phase 2, various processes were extended, and release and change management were added, including non-standard Change Management processes, to address approval steps that differ per customer. The team used the workshops to establish the most efficient processes and workflows. Following phases 1 and 2, the team has started defining the project management process.

Various useful training sessions were organized in collaboration with 2Grips. All 62 specialists followed the specialist training (online because of Covid) on how to use 4me. And then, there was the role-specific training, where everyone was first shown the new processes and then how to perform each step in 4me. All the courses were done in their own language.

In addition, there was some training to explain the 4me processes to the end users and to show them the benefits of the 4me Self Service portal. The end users can do much more themselves, saving them a lot of time and frustration.

Filip says: “Before we started, I worried that this change would go less smoothly; people always find change difficult. But it turned out to be a great success.”

The IT team recently conducted a user satisfaction survey, and they’ve seen an enormous difference in the IT service user experience.

Filip says: “After more than a year, we see very good results; it is all very positive. The research shows that over 80% of all IT service users are satisfied or more than satisfied with the quality, speed, knowledge, user-friendliness, and overall experience of the 4me solution. This was certainly not the case before. I am really amazed by these results, even more so because our university audience, students as well as professors and researchers, are known for being very critical.”

In the past, certain professors and researchers were not very positive about IT and the whole reorganization. They just wanted IT to be there for them when they needed help with an issue. Before 4me, they could go to an actual helpdesk, but that desk no longer exists. They now have to try to arrange their tickets themselves in the Self Service portal first. What helped a lot was the training that the end users received to help them get familiar with 4me and change their mindset. Most of them quickly realized how the new way of working benefits them.

Filip explains, “The advantages of the new way of working are enormous. Thanks to the shift-left, we’ve seen an increase in service desk productivity while service costs have gone down. And because employees feel more empowered using the 4me Self Service portal, employee satisfaction has gone up considerably.”

The system handles around 800-900 tickets a month, with a peak of 1,500-1,700 tickets per month around the start of the academic year. Filip says, “In our previous system, we had an average of 5,000 open requests; this is now dramatically reduced to around 400. Before 4me, we didn’t have a service catalog or SLAs, so the more difficult or complex requests often remained open. Now that we have set targets, the open requests have decreased considerably. People see when tickets are in the red, and they can be called to account.”

“Before 4me, many tickets had to be forwarded to the second-level support because the know-how wasn’t there at the first level. Now, with an ever-growing number of knowledge articles in the system, 50% of tickets are handled by first-level support. This used to be 30% The idea is that this will increase to 75% with more knowledge articles.”

According to Filip, the main improvements after the 4me implementation are:

“I would recommend 4me to anyone looking for a future-proof service management solution. It’s an innovative service-centric SaaS solution with all ITIL processes embedded in it. The reporting capabilities and dashboards are very valuable, there are no maintenance costs and we benefit from the free weekly product updates, it’s user-friendly and, last but not least, the flexible pricing model is a perfect solution for us.”

Filip adds: “We only pay for active service desk specialists and can adjust the users per month. All front-end users (ticket creators) use the tool free of charge. And all the functionality on the 4me platform is available to us, so we never have to buy additional modules. It’s in our interest to use as much of the 4me package as possible. The more we use, the greater the benefit.”
Until recently, only IT used 4me, but Hasselt University has just implemented plans to have other departments and services (like HR and Finance) use 4me. It’s the first important step to moving from ITSM towards true ESM in the future. Eventually, the university would like to have as many services as possible on one platform. One of the final goals is to work with one single entry point for all end-user enterprise tickets!
Filip says: “I am very happy that we started the project to professionalize the IT services two years ago and even happier that we carried it out with 4me in collaboration with 2Grips. The 4me tool and the guidance of 2Grips have led to the success of this project. It really turned out to be the right decision.”

“What I like most about 4me? The dashboard and reporting functionality is very special. Finally, we can give IT management and the university’s management complete insight into what we need to do, what we effectively do, and what resources are needed to do this. We couldn’t do that before.” 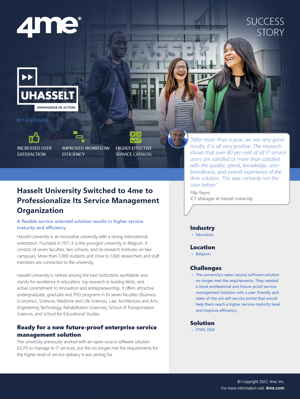